A stream of charged particles

They open and close many times a day and they're located tens of thousand kilometers from Earth. Millions of energetic particles flow through these openings. 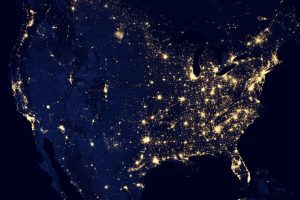 We're talking about portals in the Earth's magnetic field. At first they were hidden portals, the scientists could not find them and predict when they'll appear.

Earth's upper atmosphere is heated by this stream of particles who also spark polar auroras and geomagnetic storms. In 2014 NASA had a mission called "MMS," Magnetospheric Multiscale Mission. The mission has four spacecrafts filled with state of the art energetic particle detectors and magnetic sensors to study the hidden portals. For human perception these magnetic portals are unstable and invisible.

A process of magnetic reconnection is forming the portals. Many lines with magnetic forces flowing and crossing eachother. The crossing points of these Earth and Solar magnetic lines are creating the openings, the "X-points".

The sudden junction of these magnetic lines cause a stream of charged particles coming from the nucleus of the X-point. An "electron diffusion region"  is created.

Plasma physicist Jack Scudder of the University of Iowa has figured out how to find the hidden portals .  He used data from the late 1990s, NASA's Polar spacecraft and was able to find five combinations to measure the magnetic fields and energetic particles.

"We call them X-points or electron diffusion regions," explains plasma physicist Jack Scudder of the University of Iowa.  "They're places where the magnetic field of Earth connects to the magnetic field of the Sun, creating an uninterrupted path leading from our own planet to the sun's atmosphere 93 million miles away."

The Large Hadron Collider is using very large and strong magnets to create wormholes and portals.  Particles are studied and new particles are found.

The discoveries they make will give a new view on how the Universe is built. Perhaps questions such as: what is Déjà vu?  will be answered by the discovery of new X-points in timelines.

Science can be a beautiful synergy between the physical and the mind. What has been invisible can be made visible.

The staggeringly complex LHC ‘atom smasher’ at the CERN centre in Geneva, Switzerland, will be fired up to its highest energy levels ever in a bid to detect – or even create – miniature black holes.

If successful a completely new universe will be revealed – rewriting not only the physics books but the philosophy books too.

It is even possible that gravity from our own universe may ‘leak’ into this parallel universe, scientists at the LHC say.

The experiment is sure to inflame alarmist critics of the LHC, many of whom initially warned the high energy particle collider would spell the end of our universe with the creation a black hole of its own.