E.T. Phoned From Home and Left A Voicemail Message?

A buzz is going around on the world wide web. Random Twitter users received a 'terrifying voicemail in military code'.

Mainstream media (MSM) is reporting another alert event. This time it's going more into the realms of conspiracy theories and stranger things. Never the less, the Twitter Blue Bird Beams had enough impact for the MSM to publish these new events. Some say that these 'creepy voicemails' are part of a complex puzzle similar to Cicada 3301.   The time transportal does not know if this new voicemail alert event has to be classified as another Alert Error Echo. Maybe it has to be listed in the Disclosure area? Or perhaps it's all part of The Plan? Probably we don't have to classify this at all. Could this be something of out-of-the-box thinking? Could this alien attack warning be real?

It Started With Ty

"On March 13, Ty posted a recording of a creepy voicemail message he received on his mobile phone and asked for help translating it.

Since then it has received more than seven million views and hatched a dozen conspiracy theories, earning Ty more than 40,000 extra followers and forcing him to temporarily deactivate his account (he was getting death threats and homophobic taunts) and change his handle.

The bizarre voicemail features a robotic voice droning out an automated message entirely in NATO phonetic alphabet. Deciphered, it reads: ... " 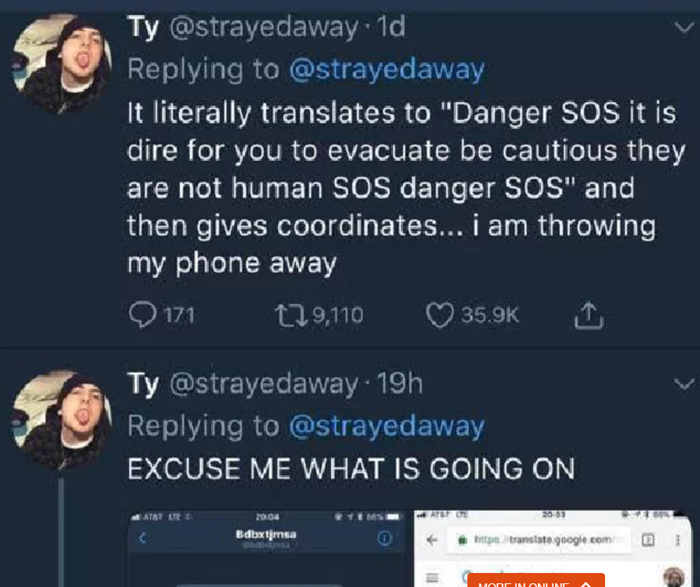 Other users set to work on the number sequence. They appeared to be a set of coordinates which, when plugged into Google Maps, led to one location in Africa and another near Malaysia."

The latter, many users noted, was “very close” to where Malaysian Airlines flight MH370 vanished from radar, leading to speculation the voicemail was a recording of the doomed plane’s encounter with an alien craft.

Many user on Twitter started to work on this puzzle. Some discovered new things, pieces to fit in this fragmented mosaic like message. Reality started to shift. Feeling like living in a movie. Netflix in real life. Some received threads but the Twitter puzzle people kept on going. And then this strange code of numbers and voicemail messages revealed something disturbing, for some, depending on point of view.

"The numerical sequences allude to April 18 as some kind of day of reckoning, rapture, or the day when “they” were “taking over”.

April 18?  That's on a Wednesday. Not far from now. Enough time to change your agenda. Move some assets. And as the world turns, a Twitter user by the name of Basspear received perhaps the most fascinating voicemail message:

“This is not a test, this is not a joke. Over the past several years we have been wanting to send an automated voice message to people who understand and are not afraid. One message at a time will make many know the truth. The truth that other biological beings have been walking the supreme creation that sustains life. Earth.

“Your accomplishments are as follows: You have created religions on a biased unrealistic god, have created a government that is corrupt and will fall soon, your weaponry is only advanced from our technology which you have scavenged from our own. The liquid lands you call your oceans contain many secrets, including some (unintelligible) sunk down into the abyss.

“We will make ourselves known to the best of our utmost capabilities. Clear your air space for safe consequences.”

It is interesting to see that mainstream media is publishing more and more conspiracy theory type of news. This is necessary, depending on point of view. It's a holistic approach. One thing for sure: soft disclosure is far more easy to overview compared to a sudden disclosure. If these alien voicemail events are real and more of this will be revealed, leading to a domino effect, then it is advised to keep the agenda empty for the coming days. Perhaps starting to prep for the unknown is an idea. Especially when the clouds will start to act like a silver screen in the sky. Reflecting images and motivating motion pictures in the minds of the people. Pictures of various blue beings on blue pilars of the Earth. In the background is the sound of a Haarp playing a cover of Kim Wilde's 'Here Come The Aliens'.  The wildlands never looked so ultra violet.  A small swarm of alien drones is coming from a mothership in orbit around the planet Earth. The weatherman on TV suddenly starts to shape shift. Not many people notice anything except their smartphone ELF and augmented reality.

This may all sound completely nuts

But perhaps better than an Idiocracy  type of future? Or not, if one thinks about the whole MH370 and MH17 rabbit-in-the-hat trick track don't look back scene. Some of are not worried and having a few DRINQS.  Focus on the timeline. And if this is really part of some sort of Cicada 3301 (online) puzzle thing, then it's a matter of liking games and puzzles, or not. A puzzle that leads to revelations regarding lost airplanes is perhaps a creepy and stranger thing indeed.