This paper is part of an integrated study by NASA and the NNSA to quantitatively understand the response timeframe should a threatening Earth-impacting near-Earth object (NEO) be identified. The two realistic responses considered are the use of a spacecraft functioning as either a kinetic impactor or a nuclear explosive carrier to deflect the approaching NEO. The choice depends on the NEO size and mass, the available response time prior to Earth impact, and the various uncertainties. Whenever practical, the kinetic impactor is the preferred approach, but various factors, such as large uncertainties or short available response time, reduce the kinetic impactor's suitability and, ultimately, eliminate its sufficiency." - Source: sciencedirect.com 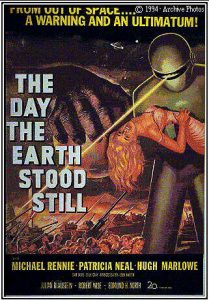 What has a sci-fi alien to do with meteors? We don't know yet, but The Day the Earth Stood Still movie quote is interesting to read.

Movie poster from the original version, 1951.

"Dante Lauretta, professor of Planetary Science in the Lunar and Planetary Laboratory at the University of Arizona, said Bennu’s impact would release “three times more energy than all nuclear weapons detonated throughout history”.

"The impact would release energy equivalent to 1,450 megatons of TNT," he said." 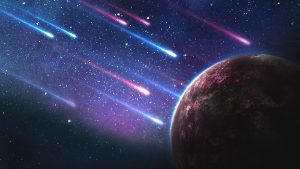 Mainstream media news articles have been published in the past regarding this subject. And the Hollywood has made many movies about asteroids and comets. The audience can imagine a scenario that is projected in front of them on a silver screen, LCD screen or other display of entertainment. It all starts in the human collective mind? It may all sound like sci-fi movies. And sure it can generate new story ideas and concepts. In the meantime scientists in the public domain are looking into the workings and characteristics of the time crystals.

"Fact following fiction? Scientists plan mission to blow up an asteroid 'hurtling towards Earth'. Plan is similar to the plot of Hollywood film Armageddon."

"How a Nuclear Bomb Could Save Earth From an Asteroid."

"Russia's Armageddon plan to save Earth from collision with asteroid."

The Russian are also into space defence of course. Especially after the Chelyabinsk event of a 20-metre near- earth asteroid that entered the Earth's atmosphere on 15 February 2013 at about 09:20 YEKT (03:20 UTC).

"About 1,100 injured as meteorite hits Russia with force of atomic bomb."

A meteor streaked across the sky and exploded over Russia's Ural Mountains with the power of an atomic bomb Friday, its sonic blasts shattering countless windows and injuring about 1,100 people." - Source: foxnews.com - 2.15.2018

For the number connectors among us, the Chelyabinsk event: 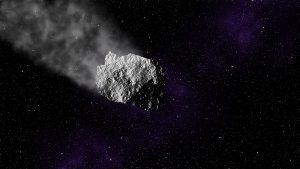 "Russian Scientists Are Devising a Plan to Nuke Asteroids."

The Plan to Depopulate the Earth?

Near Earth Objects are a hot topic. And way back in 1997 there was an obscure website named: thule.org. For some this name may ring bells and for others it may sound familiar. The Thule.org website had a very interesting article, webpage regarding asteroids and NEO's. This website has (recently) removed all content from it's site. Luckily this webpage can still be viewed in the famous internet WayBackMachine. Wayback Machine: Thule.org/plan.html

What's About this Webpage?

It was published in 1997 when internet didn't had Google, Facebook, Instagram, Tweeter and other social media. Web pages often looked very simple and basic compared to websites these days. The information that was published is somewhat disturbing and perhaps too far etched for some. It goes into the realms of the notorious 'conspiracy theories'. The time transportal is looking in all types of news media and 1997 it sure did sparked some curiosity into the subject of NEO's and planet Earth. According to the article named The Plan on Thule.org, so called 'Aryan astronomers' are searching space for a NEO that can be used for a plan. A sinister plan, depending on point of view of course. If you think this planet is full of humans and they should be removed from the surface of Earth,  the The Plan may be a very good solution. If you one of the humans that will be removed by The Plan, then The Plan is not so good plan. Also when you are a person who thinks the world problems can be solved without removal of a large population of Earth, the you may not like The Plan.

As you read this, the American public and peoples of the world are being "educated" about asteroids/meteors/comets, and the deleterious effects they can have on the Earth and "life" here. The fringe loonies are being filled with stories of "Planet X", Nibiru, the "dark star" and/or "Wormwood" on its way to collide with Earth. Various movies, "Armageddon", "Deep Impact", books "Lucifer's Hammer", etc., are made specifically so human minds can "imagine" the scenario. The "fatima" prophecies given to the popes from some illiterate girls who had a vision, caused the catholic church to build a huge telescope down in Chile to watch for the planetoid on its way in. As you read this, aryan astronomers are searching the skies and locating any potential comets, meteors or asteroid candidates, not too big, not too small for the proposed massive depopulation plan. The object that hits will have been "tipped" in to collision course on purpose. The aryans who do it will claim it was an "accident". History, i.e. primitive survivors sitting around campfires, telling the story, will say it was an act of god. Due to overpopulation pressure the "aryans" have a plan to massively depopulate the planet." - Source:thule.org/plan - WayBack Machine: web.archive.org

Screen image from the Thule.org web page on the WayBack Machine. Whether you may believe or may not believe this plan, it's interesting to mainstream media is 'educating' the people regarding NEO's. Some call this: subliminal programming, NLP, premonition and others precognition, PreCog or predictive programming. The question is: is it?

H.A.M.M.E.R. (Hypervelocity Asteroid Mitigation Mission for Emergency Response) is an interesting name. Thor has a hammer. Mc Hammer said 'you can't touch this'. And Vishnu has a sword?

"O Vishnu ! in the form of the fierce Kalki! For the destruction of the wicked, You carry a comet like sword in hand, trailing a train of disaster to them. Hail Hari! Lord of the universe!"

"Sosiosh, will be brought down on a Horse in a "tornado of fire."

"And I saw heaven open and behold a white horse, and he that sat upon him.... is called the Word of God... amid flaming fire (thunder and lightning)."

And what about a Pale Horse? We wonder what William Cooper would have to say about The Plan? Behold, a Pale Horse. Author: Cooper, William.  lighttechnology.com This whole story in short: NASA has a new project to counter attack a meteor. The name of the project is H.A.M.M.E.R. Hypervelocity Asteroid Mitigation Mission for Emergency Response. If you against this plan you can wear a banner on your clothes or on your website saying:

"In the year that Saturn and Mars are equally fiery, the air is very dry, a long comet.  From hidden fires a great place burns with heat, little rain, a hot wind, wars and raids."

New Telescope Will Scan The Skies for Asteroids on Collision Course with Earth - 6.30.2018 - space.com

The webpage  thule.org/plan.html  is back online

How far will they go to stop the November 2020 elections in the USA? Are the elections just a perfect ...
Read More