Michel de Nostradame. Also know by his Latinised name: Nostradamus. A man who had visions and prophecies, according to his legacy.

Some say he's a fraud. A man who fooled the people. And others don't doubt his predictions, often written in somewhat abstract and mysterious Quatrains, the name he gave to his short poem like pieces of words.

The present time together with the past

Will be judged by the great Joker:
The world too late will be tired of him,
And through the clergy oath-taker disloyal.

His Quatrains are written in some kind of code. He needed to do that for several reasons. One of them is to hide his prophecies for the dominating church during his time. He was afraid of being persecuted for heresy by the Inquisition.

He worked as an apothecary after he studied at the University of Avignon. A city in France, known for that song "Sur le Pont d'Avignon" about the Pont d'Avignon that dates back to the 15th century, around the same time period Nostradamus was in Avignon.

The quatrains, published in a book titled Les Propheties (The Prophecies), received a mixed reaction when they were published. Some people thought Nostradamus was a servant of evil, a fake, or insane, while many of the elite evidently thought otherwise. Catherine de Médicis, wife of King Henry II of France, was one of Nostradamus' greatest admirers. After reading his almanacs for 1555, which hinted at unnamed threats to the royal family, she summoned him to Paris to explain them and to draw up horoscopes for her children. At the time, he feared that he would be beheaded,[29] but by the time of his death in 1566, Queen Catherine had made him Counselor and Physician-in-Ordinary to her son, the young King Charles IX of France. 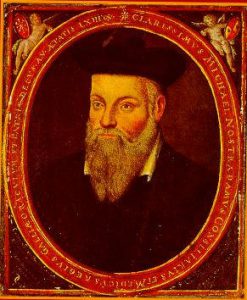 What was the Spark of the Prophecies,  Talent?

Was it a gift from birth? Did he took certain substances to obtain a state of mind which led him to a higher consciousness? Or was he a member of the time track guild? Could it be that his Quatrains are some kind of map to travel through timelines? But if he indeed could prophesize the future, did he saw only one timeline? And is that timeline our current timeline?

Questions Regarding the Quatrains

Some people think that the code implemented in Nostradamus' Quatrains are based on numbers. Because letters, phrases and words can be translated into numbers which can explain certain aspects of his Quatrains or even explain his prophecies of the future.  The ties between letters, words and numbers have been used to code and decode since aeons. It's all connected any-way and it's all a form of language and communication. A well know practice or belief in numbers and words is that of the Kaballah.

In the late sixteenth century, four separate editions of the Nostradamus prophecies were published in the city of Paris, each of which contained major textual alterations from all other editions: thirty-nine prophetic stanzas were entirely deleted and replaced with other stanzas. Morten St. George, author of Incantation of the Law Against Inept Critics: A Guide to Cryptic Thinking, made a discovery. He discovered that the numerical sequences of consecutive deletions corresponded exactly to numerical sequences found in a book called the Sefer Yetzirah, the earliest known text of the medieval Kabbalah.

That was only the beginning. St. George's next discovery was that many sections of another classical text of the Kabbalah, known as the Bahir or Sefer ha-Bahir, were essentially a cryptic derivative (riddles and parables evidently designed to teach in the style of the masters of Zen) of prophecies published by Nostradamus centuries later. It became self-evident that some of the famous prophecies were known in medieval times and hence predate Nostradamus. The ancient prophecies had a name: the Revelations of Elijah.

The rock holds in its depths white clay

which will come out milk-white from a cleft
Needlessly troubled people will not dare touch it,
unaware that the foundation of the earth is of clay.