The cause of the alarm error in the Netherlands has been identified according to an article published today by a Dutch website 1limburg.nl. Limburg is one of the provinces that experienced the no-alarm error.

End of this News Update.

Silence in the Dutch Mountains

The Netherlands is the 4th country this year that experienced an alarm error.
This time it was not an error of a sudden false alarm but a no-alarm situation instead.

In the Netherlands there's a monthly test schedule of the national alarm system. Every first Monday of the month, at 12:00 the alarm system will do a test. These acoustic tests can be heard all over the country. They sound like trumpets
increasing their volume in a sinus type of wave.

The first Monday of March 2018 at 12:00 the monthly alarm test was scheduled, just like every month. Many Dutch people were surprised when they noticed the silence at 12:00 on Monday the 5th of March. No alarm was heard in several provinces throughout the nation.

The fire department of Amsterdam and Amstelland (the Amsterdam area) announced via Twitter that a technical issue was the cause of the error. They don't know how long the issue would take to resolve. And if any emergency situation would occur, they will provide information via NL-Alert, a text messaging service.

"They are still trying to establish the cause of the breakdown."

The Fourth Alarm Situation This Year 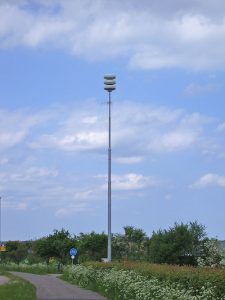 The question is of course: are these just coincidences? Or is there more to all these alarm errors?

Four errors in various countries, in only 3 months. Perhaps there's a certain pattern.
These events may be dots to connect and only to reveal it's meaning after certain alchemic procedures of analyzing information are applied?

What 2018 may bring more on alarm (error) events?
In the mean time: Stay tuned!