A Story About a Future Timeline

Jennings (Ben Affleck)  is an inventor who works as a freelancer. After he finished a project of developing a holographic television, that took a few months, his memory is erased. This is part of his contract; to let his memories (of working on the inventions) erased.

This is done by using a chair with some kind of electro magnetic field device around his head. The operator on the computer can see his memory particles and nerves and destroys the targeted memories.

Then Rethrick (Aaron Eckhart), an old friend who has a technology firm, approaches Jennings for a proposal:  To work on a very hi-tech project for around 3 years.  And let his memory be erased after finishing the very secret project.
At first Jennings has to think about it. But when he hears that he'll receive a paycheck with six figures (90 million Dollars) for working on this secret project, he decides to do it. 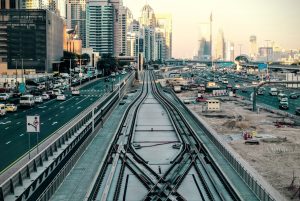 The Future on a Holographic Screen

The beginning of this new project starts with an injection in Jennings arm at the technology lab, in the room of Rethrick. Some kind of chemical is injected to mark the starting point of the memory of the new project. He wakes up in the same room where he finds Rethrick sitting in front of him. The project is finished.

Three years have passed and Jennings doesn't remember anything of it and he receives his paycheck. Jennings is going to the bank where wants to get his money from the paycheck with stocks. There he finds out that all his money has been withdrawn from his account twee weeks before... by himself.

The only thing left is a brown large envelope with a few items which seem not significant, such as; a paperclip, a public transport ticket, a key, a bullet and sunglasses.  And the envelope has 5 stamps. One stamp too much. The bank employee tells him that he left the envelope for himself. He almost goes crazy and doesn't understand why he would withdraw all his money from his own account, leaving him with just an envelope.

During the movie he finds out that he had been working on a secret project to build a device that can look into the future. He also finds out that this technology was stolen from the government and that his old friend Rethrick want to get rid of him,  for he may know too much. Meanwhile Jennings is also been questioned by the FBI about the stolen technology.
When he's running from the FBI and Rethrick's men, he discovers that all the items in the envelope have a reason and a purpose.
For example: He's at a bus station running for the FBI and then he noticed the public transport ticket he can use to travel with.

Suddenly he realizes that the reason why he left these items in the envelope for himselfs is because he had seen the outcome of future situations. And that this is because he had been working on a device that can project the future on a holographic screen.

In the meantime he also reconnects with his girlfriend Rachel (Uma Thurman). He had a relationship with her during the three years working on the secret project. He has forgotten about her due to the memory erase. But he left hidden signs for him and Rachel so they could meet after the memory erase.

At the end he also finds out that he has hidden something in one of the 5 stamps on the envelope.

The Device that can Look into the Future

The interesting part of this movie is the device that can look into the future timeline. The device may be real, according to some people who have been working with secret projects.  The Looking Glass device has similarities of the device in Paycheck.

The storyline of Paycheck is great. It clearly shows the possiblity of timelines, and how a person can act and react when seeing a future timeline. The main character Jennings had a clever way to perpare himself for future mistaked and errors.
By following his own future breadcrumbs of items (in the envelope)  he was able to follow a timeline with a better outcome for himself and his friend.

A very good movie that shows the dynamic part of possibilities of future timelines.
The action and screenplay may be typical Hollywood but it doesn't affect the feeling and vibe of this movie. It may perhaps increase the viewing experience?

The props and devices look real. No over-the-top sci-fi props.

A paperclip and a brown envelope.
Postal stamps whith the portrait of Albert Einstein.
Several small metalic balls inside a transparent cylinder case, inside the envelope.
19 items in the envelope.