The US Strategic Command posted a strange tweet just a few hours before the annual "ball drop" on top of One Times Square, a New York skyscraper, which marks the start of the new year.

The U.S. Strategic Command oversees America’s nuclear and missile arsenal in the United States of America. The tweet was  accompanied by a video of a B-2 bomber dropping bombs. Luckily no video of a TR3B Astra was shown, which is much more scary.

In their tweet they mentioned to drop something much bigger, compared to the Times Square New Year's Eve Ball. The Ball Drop happens every year on December 31 in NYC. A big crystal like ball is dropped before the end of the year to start the new year.
A nice time travel symbol which is handy for timeline key frames as well.

May be the fireworks they had in mind was a little bit too much for this new chapter in the battle of the worlds. US Strategic Command deleted their tweet and launched a new tweet saying it was "in poor taste", and replaced it with an apology.

The tweet was accompanied by video of B-2 bombers dropping two 30,000-pound conventional weapons at a test range, according to CNN, which aired the video.

The tweet on Strategic Command’s Twitter account was replaced with an apology: “Our previous NYE tweet was in poor taste & does not reflect our values. We apologize. We are dedicated to the security of America & allies.”

The first tweet read in part: ”#TimesSquare tradition rings in the #NewYear by dropping the big ball...if ever needed, we are #ready to drop something much, much bigger.” 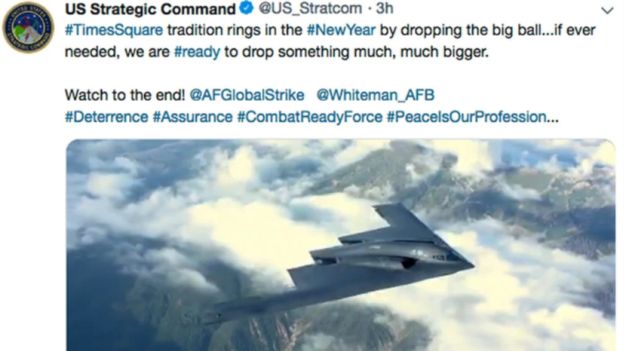 The tweet of the US Strategic Command before it was deleted.

Timing is crucial. And tweeting something like that is of course very interesting. It was not addressed directly to someone or a group. But who knows, in the know it may be much more clear than the public domain will notice. And perhaps 2019 will lift much, much more of the veil of what's happening behind the curtains.  Veils and curtains, both can be moved by the wind.

Important - US military tweet in response to recent power outages and strange phenomena.

US military strategic command tweet they are prepared to drop a nuclear bomb on any enemy of the US.
This has since been withdrawn with apologies.

The time transportal published an article recently showing a 911 code in the events of transformer explosions in New York and Kenner Louisiana and the Norway Spiral. As you may know the 911 code is often embedded in world events and other expressions on world stage. If the US Strategic Command tweet was indeed regarding the transformer explosions, then this means  that the 911 code embedded in the recent events is real?