A mixture of Total Recall, Mission to Mars, Asgardia Space Nation and Alternative 3. More than a formula for a hippy trip.

We could send people to Mars decades ago

It's always easy to say  'we could..' after events took place. Some sort of verbal time travel. But when it comes to subjects like traveling to planet Mars, things are placed in a different light.
Mainstream media has published news saying that we've could been to mars in the 60's. This is of course interesting for those in the UFO community and other people into secret space.

NASA shocker: Astronaut reveals humans could've been on Mars in the 1960s

"We could send people to Mars decades ago," Hadfield told Business Insider.

"The technology that took us to the moon and back when I was just a kid – that technology can take us to Mars."

Hadfield was referring to the famous Apollo 11 mission: it was the spaceflight that landed the first two people on the moon.

Americans Neil Armstrong and Buzz Aldrin touched down on the moon on July 20, 1969 – and Hadfield is convinced that same spaceship technology could put us on Mars.

The problem, according to Hadfield, is that those classic space shuttles would simply take too long to get to Mars.

This poses loads of risks, particularly illnesses caused by the tough environments in space.

"The majority of the astronauts that we send on those missions wouldn't make it," he explained.

There have been various whistleblowers claiming to have been in secret space projects to explore space and colonize planets.

One of the most famous is Laura Magdalene Eisenhower, the great-granddaughter of Dwight D. Eisenhower.

"In a public statement, Laura Magdalene Eisenhower, great-granddaughter of former President Dwight David Eisenhower (1890-1969), has exposed her attempted recruitment from April 2006 through January 2007 by a secret Mars colony project."

"Eisenhower became intrigued by the subject of ET contact after hearing rumors of Ike meeting with extraterrestrials and his involvement with the Majestic-12 secret committee.

Upon further research, Eisenhower said she found corroboration of the documents and stories she was reading, leading her to believe the events were real and did in fact take place. Though, she says none of her beliefs come from her family members and her views and theories are her own.

Hero astronaut Chris Hadfield says we could've sent humans to Mars in the 1960s – but there's a very good reason we didn't.

The former International Space Station commander said the risk of death was simply too high."

"The situation is made more complicated by the fact that the distance is constantly changing as the two planets rotate around the sun.

The closest that Earth and Mars can ever be is a distance of 33.9million miles – or 9,800 times longer than the trip from London and New York.

A more useful distance is the average gap, which is even bigger at 140 million miles.

Launching shuttles to Mars so far has taken huge lengths of time – anywhere from 128 to 333 days.

That's an incredible length of time to be aboard a cramped shuttle, particularly one so far from Earth – where the opportunity to launch rescue missions is near-impossible.

One is the threat from deep-space radiation, which can cause cancer due to prolonged exposure." 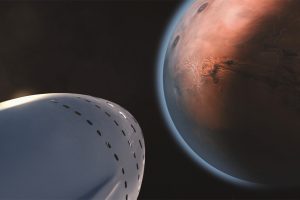 A musical journey with many questions regarding the worldwide lock down. Music is one of many ways to explore the ...
Read More