! NOTE: This article is not anti nor pro Trump. It´s not about the 911 attacks in 2001. This is about Trump the time translator who has a 911 code in various aspects. Time translators are persons, organizations, ideas, devices or other elements that are dots to connect in the time phenomena on Planet Earth.

Donald J. Trump doesn't need an introduction. People on this timeline on Earth know who this man is.
Scroll down to the bottom of this article for an overview of the 911 code.

The symbology and meaning behind the name Trump is obvious. We'll look into some other symbols of Trump.
Let's see if there are some nice dots to connect.

The Dog occupies the 11th position in the Chinese zodiac after the Rooster and before the Pig.

In Chinese astrology, each year is related to a Chinese zodiac animal according to a 12-year cycle.

The Gemini symbol, or glyph, is designed to depict the Twins or the Roman numeral II for duality. This is the Gemini horoscope symbol and the character that represents this zodiac sign.

In both the Chinese and western horoscope the number 11 is present for Trump. The Dog occupies the 11th position in the Chinese zodiac and the Gemini symbol, or glyph, is designed to depict the Twins or the Roman numeral II for duality.

June is the 6th month.

His birthday number is 4.

He's the 45th and current president of the United States.

The number 11 or duality is much present in Trump's numbers. The number 11 can also be a symbol of two lines next to each other. Two timelines? There are various things regarding Trump and strange time elements.

Trump is a Time Translator

A Time Translator is a person - or group of persons - who has contributed to the collective mind and society of humanity, regarding the aspects of the dynamics of time. This can be in various ways, such as; art, science, music, poetry, literature and so on.

Why did I choose Trump for this article (and not an other US president) as a time translator?

He makes full use of today's modern technology by tweeting almost everyday. As far as I know he may be the first U.S. president that is actively addressing the public by himself. 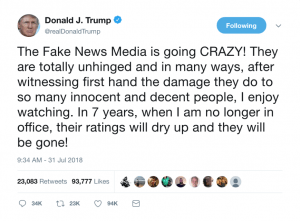 Tweeter is a well known 21st century self expression website and Trump is making full use of this medium to speak his mind directly to the public. It's also a safe medium for a president. Words can't be changed by the media if Trump is tweeting on his own tweeter account.

A tweet is a real time broadcast of words.

Corrupted media is a typical thing these days. Which brings us to: Fake news. Something Trump is often talking about. A phrase that is now known for Trump. He talks about the fake news media during speeches and sometimes in his tweets.

As far as I know he may be the first U.S. president who is openly talking about fake media reports and news channels with biased news.

In his way of talking and writing Trump is reaching  wide audience by using common words and phrases. In other words: he doesn't have the standard political way of speaking. Spoken and written words are often bound to certain time periods and his way of communicating to the public fits the current timeline.

For this article I don't really want to go into the political aspects. There are few that are perhaps worth mentioning, such as:

There's a lot of controversy about Trump's plan to build a huge wall at the border of Mexico to stop large groups of immigrants, mostly coming from South American countries. There's a lot of mainstream media news regarding refugees fleeing war and conflict zones. They're trying mostly to immigrate into European countries, Canada, Australia and America.

It may sound completely nuts but I think Trump understands and innerstands the plot of Game of Thrones.
Stories, myths, legends and saga's such as Lord of the Rings, Game of Thrones, the Bible, the Quran and more, may be very well based on real events from the past, present or future. Depending on your point of view and your position on the moebius timeline. There are certain groups and families who take these books very seriously. By understanding a story such as Game of Thrones, one also may understand Trump's plan for the wall. In my opinion this has nothing to do with refugees or immigrants. Take a close look around in the public domain and you'll notice the changes in some humans and other lifeforms.

Those who have seen the series Game of Thrones (GOT) will recognize some things from these news links.

The giant ramparts, compared in significance to Hadrian's Wall, guarded the Altai Mountains against attack from the steppes to the north and were built by an unknown civilisation.

During a little paragliding and walking through surrounding valleys they saw many towers and walls, giving potential for hundreds of new routes in this compact area.

President Trump wants a United States Space Force. It somewhat strange that no other president has called for this before. This makes him also a typical president that translate time aspects on this timeline. A secret space force is of course already going on. And you may probably already read or heard about it.

Secret Space came in 2002 in the mainstream media after Gary McKinnon hacked into 97 United States military and NASA computers over a 13-month period between February 2001 and March 2002.
He claimed to have found evidence of off world space activities by US military. Solar Warden. Bob Dean. Garry Mc Kinnon and many more names that are worth looking for on the world wide web.  See also: Asgardia... And so it begins 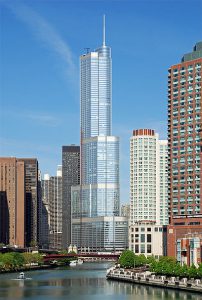 After being a successful businessman he decides to run for president of the U.S.A.  Perhaps the most dangerous profession in today's world.

The presidency of Donald Trump began at noon EST on January 20, 2017, when Donald Trump was inaugurated as the 45th President of the United States, succeeding Barack Obama.

As a business man he built lots of large buildings that will probably stand for a long time... into the future.

During his campaign while running for president something strange happened. Lightning struck the Trump Tower in Chicago.

Social media users posted photos as severe weather hit Chicago and nearby areas, with even tornadoes touching down in some parts of the state.

Then, to cap things off, lightning struck the Trump Tower.

Strange Trump Echo From the Past

On the internet you can find lots of websites about the Simpsons and Trump. The Simpsons is a famous animated cartoon television series. The rumor goes that in one episode from the year 2000 Trump is president of the U.S.  (in the future). He's on a stairway with his wife and surrounded by public. In the Simpsons episode is the same scene except Trump is with Homer Simpson, one of he main character of the animated cartoon series.

The pictures which have been widely shared, of Trump on the escalator and Trump campaigning on stage, aren’t from 2000. They’re from 2015, after Trump announced he was running.

There is a little bit of truth to the rumour, though. In The Simpsons S11E17 ‘Bart to the Future’ – which is from 2000 – Lisa is sitting in the Oval Office and says: “We’ve inherited quite a budget crunch from President Trump, how bad is it Secretary van Houten?”

In  the episode The Simpsons S11E17 ‘Bart to the Future’  the name Secretary van Houten was mentioned. In the Dutch language Hout means: wood. Literally translated to Dutch the name van Houten will be: From Woods.

The name Wood in connection with Trump appeared in the media in the year 2018.

US District Judge Kimba Wood on Friday sided with the government over President Donald Trump, his longtime lawyer Michael Cohen, and the Trump Organization in the latest fight over the documents obtained during the FBI raids on Cohen’s home, office, and hotel room in April. 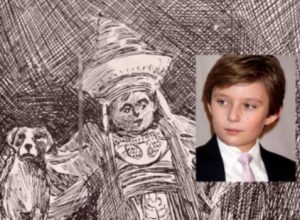 Baron Trump’s Marvellous Underground Journey is the title of a book published in 1890 that depict a character named Baron Trump. The son of president Donald Trump is: Barron. He's the fifth child of president Trump.

There were also lots of online rumors about time travel and the book from 1890.

Barron Trump, son of president Trump looks like the character from the book.

In these books, the young German protagonist, Wilhelm Heinrich Sebastian Von Troomp, better known as Baron Trump, travels around and under the globe with his dog Bulger, meeting residents of as-of-yet undiscovered lands before arriving back home at Castle Trump.

Social media is abuzz over a pair of books published in 1890 that depict a character named Baron Trump.

While a character in a book who shares the name of the youngest child of the president may not be all that unusual, it’s the details of the fictional Baron Trump that has tongues wagging.

In the novels, fictional Baron lives in Castle Trump, which happens to sit on Fifth Avenue in New York City. Oh, and he’s aided on his time-travel quest by a man called “Don.”

The books have helped reignite a conspiracy theory on Reddit that claims the Trump family has been involved in time travel. According to some on Reddit, Trump’s uncle, John Trump, who was an engineer, was a pioneer in time travel. 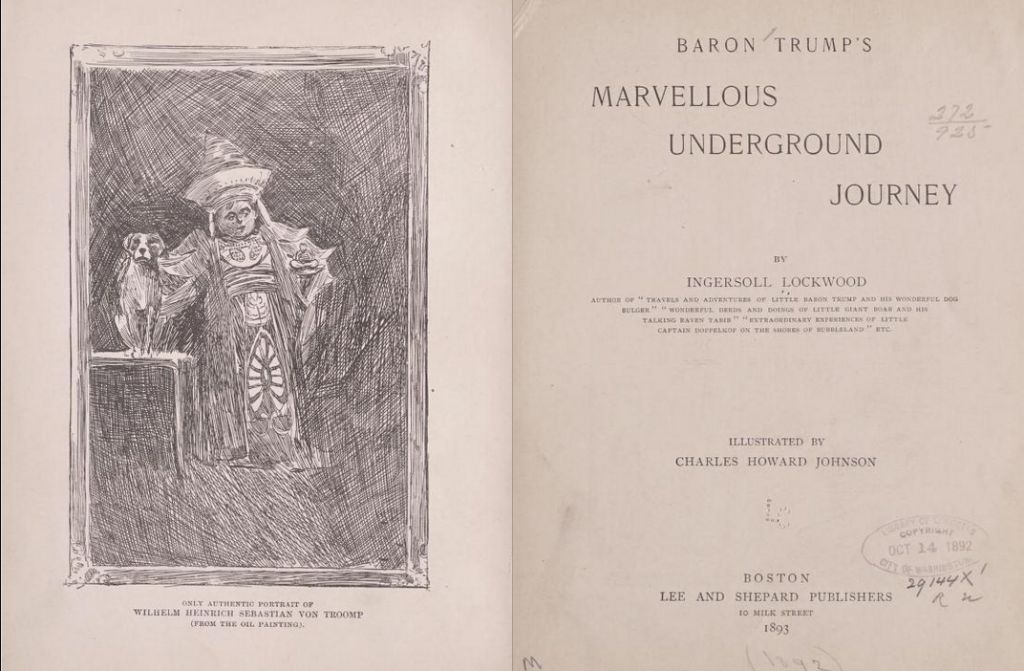 And there's the strange case of John Titor. A time traveler that even mainstream media is talking about.

As Donald Trump prepares for his inauguration as president, the theories of his supposed connection to a thrill-junkie time traveller have resurfaced.

Many are convinced that a man called John Titor time travelled from the year 2036 to 2000 to warn the world of an impending nuclear war at the hands of ISIS.

Appearing only in online forums 16 years ago, nobody knew the identity of the man who vanished without a trace – but some are now certain that this man was none-other than president-elect Donald Trump.

Conspiracy theorists now believe that billionaire tycoon Donald Trump is poised to use the highest position on the planet to stop the impending nuclear war with ISIS terror-nuts.

Donald Trump, who has supposedly already seen a future ravaged by the destruction of a nuclear conflict, is detirmined to avert the oncoming apocalypse at whatever cost.

Overview of the 911 Code and Trump

As you can see a 911 code is embedded through Trump in various ways.

The strange aspects of the numbers and the symbols  surrounding Trump and the online rumors about him being a time traveler makes him suitable to be listed as a Time Translator in the time transportal.

2019-01-05
Previous Post: US Strategic Command NYE Tweets ‘We Are Ready To Drop Something Much Bigger…’
Next Post: Spektr-R Silent and Bright Ball Above NZ