Fake News is a Hot Topic During These Strange Days

Various tribes blame each other for spreading disinformation a.k.a. Fake News.

Cake is not fake. Cake is sweet and with enough butter it may even be fulfilling.
We advise not to use margarine as this was invented to feed farm animals, especially: Turkeys and Goose... right?

"Nope. Not even remotely true. It's actually a bit absurd. Margarine was invented in France by Hippolyte Mège-Mouriès in 1869, during the Franco-Prussian wars. He invented it in response to a competitive challenge from the French government under Napoleon III, who was looking for a cheap and stable substitute for butter, and offered a big prize to anyone who could pull it off."

It's not sure whether Marie Antoinette has spoken these famous words. Rumor goes that she said 'Let Them Eat Cake' regarding the situation of the poor. Disinformation is as old as news and entertainment itself. Perhaps one of the most famous disinformation examples is in Shakespeare's Romeo and Juliet. When Juliet receives fake news that Romeo has passed away and left the Earth. Another example may be: Troy. Which is now known as Turkey. The famous story of a fake wooden horse bringing fake news.

"Let them eat cake” is the most famous quote attributed to Marie-Antoinette, the queen of France during the French Revolution. As the story goes, it was the queen’s response upon being told that her starving peasant subjects had no bread. Because cake is more expensive than bread, the anecdote has been cited as an example of Marie-Antoinette’s obliviousness to the conditions and daily lives of ordinary people. But did she ever actually utter those words? Probably not." 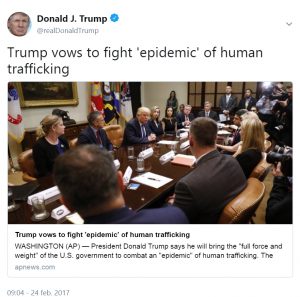 Word Up Down to Earth

The mainstream media is filled with fake news since the beginning of mass news publishing. The time Mogul Trump is one of the people who brought the term Fake News into the public domain. That may be the main reason that the 45th president of the U.S.A. is using the Blue Bird Twitter to speak his mind.

When publishing words (on Twitter) it's more difficult to change or alter words and messages afterwards. His Twitter echo's are what they are: his words.

A Trump Tweet shock to the system. Is this why mainstream media is not reporting honestly? Note: the timestamp of his Tweet.

Many have been into the so called 'conspiracy theories' before the arrival of the internet. Underground magazines, books and VHS tapes of strange phenomena and (government) cover-ups. You may have seen the shift on the internet, especially after Google came on the web. The search engine authority. You may have noticed that there's less (alternative) information shown in the search results. The same with YouTube, lots of filtering and 'down numbering' views and likes in order to maintain the status quo of the mainstream media. 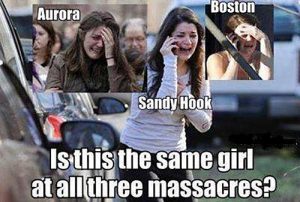 On this present timeline there's also the fascinating phenomena of so called: Crisis Actors. People who have been hired to function as actors during false flag attacks. Mostly to make sure the American citizen will give up their right to bear arms.

Photo:  This is a famous meme about a girl who seem to be in several 'terror events' or even so called false flags.  Do you think this is the same person?

Typecasting has been used for centuries. And still in these modern times we all can see various examples of typecasting. To fit the image into the public domain and collective consciousness, certain types have to be on the world stage and do their thing, sometimes a stranger thing. Imagine that Mr. Gates didn't look like he does; a smart computer geek type of person. Imagine he'd looked like Sylvester Stallone.  The mass would have more difficulties accepting the stage due to the public image of smart computer nerds;  wearing (thick) glasses and simple sometimes clumsy clothes. You get the picture: to keep the show going, the people on stage have to fit the play.

"Actors are one family over the entire world." - Eleanor Roosevelt

The time transportal is not into fake news. We don't make things up. We compile, collect and look into all kinds of news, such as: mainstream media newspapers worldwide, local news papers, various sites and the so called alternative news media, which is getting much more interesting on the present timeline.

Here are some quotes that may shine a (different) light on news and spreading of information. When doubting the origins of these quotes, one can always look on the world wide web for more info...

"Four hostile newspapers are more to be feared than a thousand bayonets."

"Football, beer, and above all gambling, filled up the horizon of their minds. To keep them in control was not difficult."

"The news and truth are not the same thing."

"News is what someone wants to suppress. Everything else is advertising."

"We tell the people what they need to know, not what they want to know."

"Our job is to give people not what they want, but what we decide they ought to have."

"Most ignorance is vincible ignorance. We don't know because we don't want to know."

“How fortunate for governments that the people they administer don't think”

“We'll know our disinformation program is complete when everything the American public believes is false."

"A return to first principles in a republic is sometimes caused by the simple virtues of one man.

His good example has such an influence that the good men strive to imitate him, and the wicked are ashamed to lead a life so contrary to his example."

"Consider your origin; you were not born to live like brutes, but to follow virtue and knowledge."

"Man, the living creature, the creating individual, is always more important than any established style or system."

"Anyone who conducts an argument by appealing to authority is not using his intelligence; he is just using his memory."

"Those who are able to see beyond the shadows and the lies of their culture - will never be understood, let alone believed, by the masses."

"What I need is something so scary that it will clear 300 square miles of every living Christian soul."

"None are more hopelessly enslaved than those who falsely believe they are free."

'We're an empire now, and when we act, we create our own reality. And while you're studying that reality -- judiciously, as you will --  we'll act again, creating other new realities, which you can study too,  and that's how things will sort out. We're history's actors. . . and you, all of you, will be left to just study what we do."

"All truth passes through three stages. First, it is ridiculed. Second, it is violently opposed. Third, it is accepted as being self-evident."

"The illusion of freedom will continue as long as it's profitable to continue the illusion. At the point where the illusion becomes too expensive to maintain, they will just take down the scenery, they will pull back the curtains, they will move the tables and chairs out of the way, and you will see the brick wall at the back of the theatre."

You have to understand...
...most of these people are not ready to be unplugged.

- Morpheus (Laurence Fishburne) in the movie The Matrix (1999)