What happened that thursday evening just after Christmas?  The sky above the Astoria neighborhood of Queens NYC was filled with a turquoise bluish light. It was something like a supernova above the Big Apple. On that same day December 27 2018 in Kenner Louisiana another explosion of an electric transformer took place.

In this article we going deeper into the New York blue beam event because it has some interesting dots to connect. The connection Queens and Louisiana is also interesting. But for now we stay in the Big Apple.

Transformer explosions sparked by high winds created a colorful light display above Kenner, Louisiana before dawn and left the town without power on December 27.

Winds gusted up to 47 miles per hour in the area, according to meteorologists, knocking down power lines and sparking fires. Hundreds were left without power and streets were closed, according to the City.

Yes, Astoria, the Greek, Latin, and French words for star all sound like estella or estella, and the shift from l to r is common in pronunciation changes. So your Astoria could be Greek or Latin or French and mean “star.”

But there is a more wonderful possibility. Asteria, sometimes spelled Astoria, is the name of a number of Greek goddesses and heroines. (Asteria (mythology) - Wikipedia) So you might be more than a star, you might be a goddess!

Astoria is the neighborhood in northwestern Queens (pop. approx. 225,000), constituting the part of Long Island City north of Broadway, east of the East River, west of roughly 51st Street and south of the Long Island Sound. There may be as many geographic descriptions of Astoria as there are residents. It was developed from 1839 by Stephen A. Halsey, a fur merchant who petitioned the state legislature to name it for the prominent fur trader John Jacob Astor, in an unsuccessful effort to have Astor become a financial patron of the area. During the 1840s and 1850s it grew slowly inland from the ferry landing at the foot of Astoria Boulevard (where an early settlement was known as Hallett's Cove). Wealthy New Yorkers built mansions on 12th and 14th streets and on 27th Avenue.

An explosion at an electrical substation in Astoria, New York City, illuminated the skyline with a bright blue light and cut off power to LaGuardia airport, causing flights to be diverted or delayed.

The glow could be seen from Manhattan shortly after 9 p.m. EST Thursday following a “brief electrical fire” at the facility in the Northern Queens neighborhood, said Bob McGee, a spokesman for utility Consolidated Edison Inc.

Some of the footage taken from that event, videos and photo's show a fierce glow. Almost like it's in the clouds.  It may be the reflection on the clouds of the electric discharge of the transformer.
Of course this event is something special. The amount of glow and intensity. See video at the bottom of this page.

The Notorious Combinations of Numbers 11 and 9

Around 9:12 p.m., the sky over New York City turned several shades of bright fluorescent blue. There was smoke and a loud hum. People freaked out on social media, wondering if aliens had invaded. La Guardia Airport went dark.

The culprit turned out to be an explosion at a Con Edison plant in Queens. Miraculously, there were no injuries, except perhaps to the feelings of those who truly wanted to meet some aliens.

According to the New York Times the explosion happened 'around 9:12 PM'.

May be the first spark was ignited at 9:11 PM. Very symbolic. But also very 'may be'.

The day of the NYC transformer explosion was on

The number of the NYC transformer explosion is 5 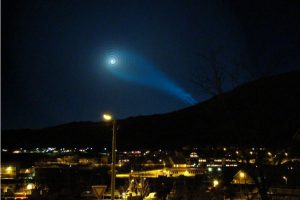 The Norway Spiral event happened on

See video at the bottom of this page.

The number of the Norway Spiral event is 5

9 years, 19 days including the end date.

One. The point in time between two strange events.

Was Norway’s HAARP Facility EISCAT Responsible for the Norway Spiral?

EISCAT, short for the European Incoherent Scatter facility, is located at Ramfjord, about 20 Kilometers South of Tromsø in Norway where the "Norway Spiral" or the Blue Spiral was seen back in December 2009. It's been said that the "spiral test" or "experiment" caused all kinds of side effects.

What does it all mean? What happened? Was it really an explosion of a transformer in New York? The Russians did it, just like the Norway Spiral?  Lots of video available online of these events and some said  they saw an UFO.

2018-12-30
Previous Post: Krakatau No Tsunami Warning – The 7th Alarm Event of 2018
Next Post: US Strategic Command NYE Tweets ‘We Are Ready To Drop Something Much Bigger…’