This needs no further explanation. The use of nuclear weapons is an extreme act of war and no leader of any nation with a sound mind will think of using such weapons. But there's more to it, regarding this type of weapon than total destruction and the spread of radiation. A nuclear detonation is a chain reaction of atoms being smashed. The use of radio activity , such as Plutonium adds a time transportal element to the mix of blended atoms and explosions.

Ancient nuclear technology is described in the Hindu texts of the Veda's. and evidence of ancient nuclear explosions can be found on earth. 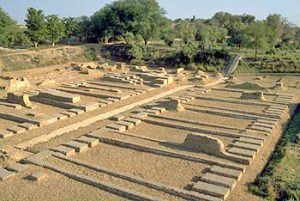 The story begins when a layer of radioactive ash was found in Rajasthan, India.
It covered a three-square mile area, ten miles west of Jodhpur.

The research occurred after a very high rate of birth defects and cancer was discovered in the area.
The levels of radiation registered so high on investigators’ gauges that the Indian government cordoned off the region. Scientists then apparently unearthed an ancient city where they found evidence of an atomic blast dating back thousands of years: from 8,000 to 12,000 years.

The famous Indian writings of the Mahabharata describes an event that resembles a nuclear weapon.

... (it was) a single projectile
Charged with all the power of the Universe.
An incandescent column of smoke and flame
As bright as the thousand suns
Rose in all its splendor...

...it was an unknown weapon,
An iron thunderbolt,
A gigantic messenger of death,
Which reduced to ashes
The entire race of the Vrishnis and the Andhakas.

The Mahābhārata (Sanskrit: महाभारतम्, Mahābhāratam, pronounced [məɦaːˈbʱaːrət̪əm]) is one of the two major Sanskrit epics of ancient India, the other being the Rāmāyaṇa.

The oldest preserved parts of the text are thought to be not much older than around 400 BCE, though the origins of the epic probably fall between the 8th and 9th centuries BCE

Robert Oppenheimer a.k.a. the father of the atomic bomb has made parallels with the words of the ancient Hindu text, the Bhagavad Gita after the first atomic bomb was detonated on July 16, 1945, in the Trinity test in New Mexico.

We knew the world would not be the same. A few people laughed, a few people cried, most people were silent. I remembered the line from the Hindu scripture, the Bhagavad-Gita. Vishnu is trying to persuade the Prince that he should do his duty and to impress him takes on his multi-armed form and says, "Now, I am become Death, the destroyer of worlds." I suppose we all thought that one way or another. 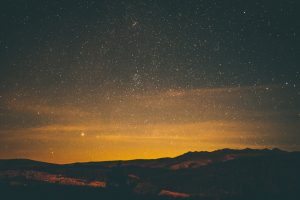 An atomic bomb is a very sensitive device. Although it can destroy large areas and populations, the use of such weapon is not a matter of just pushing the red button.

Various holistic aspects must be in specific configurations.

In Chapter 16 of The Lost Age of High Knowledge, with what information had been revealed up until this point in the book in furthering the pioneering work of Bruce Cathie, the general explanation given as to just how a nuclear explosion was generated focused almost exclusively upon an ‘Earthbound Harmonic Convergence’ of certain propitious energetic waveforms associated primarily with the sun, as being responsible for triggering a nuclear test weapon (synchronised of course with an internal implosion of the plutonium core of the device). Up to this point in the book then, the concept of a matter transfer between celestial bodies, such as the earth and the sun, had not yet been introduced.

Now indeed, resonance was of course implicated as the ‘final nuclear trigger’ to initiate a nuclear explosion, but resonance itself as a dynamic physical process in action; one may consider to be simply a critical state of vulnerability of the nuclear weapon as a system, or indeed as described in the Lost Age, as an elaborate musical instrument. As was related in the book, the implosion of the plutonium core at the heart of a nuclear weapon to achieve super-criticality, produces a state of resonance in the device itself, such that the nuclear bomb can then be destroyed by the power of the celestial frequencies briefly focused upon it during activation.
Source: www.ancient-world-mysteries.com

All these things are important aspects in the timeline we're currently living. Also important regarding the past timeline, were ancient nuclear explosions occurred on earth. Many aspects must be in line with laws of physics, on earth and off earth. A media image of a mad man who is willing to push the button at any time may be nice for a movie , but in reality a nuclear event must be planned and configured in advance in order to get the desired outcome, without any unwanted side effects such as earthquakes.

Connection with other Planets

The French did a series of nuclear detonation tests around the islands of French Polynesia. Certain atolls - small islands - were used to test atomic bombs. This area is like a paradise on earth. Blue sea, white beaches and coconut trees.  A very strange place for testing devices of destruction.

Each test had it's specific code name. 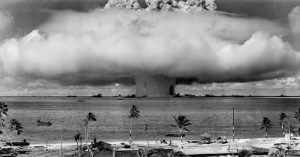 As you can see, all these names are from places outside planet earth. Places in space.
What could be the reason to use these kind of names for nuclear tests? Why did they not choose the same type of code names as the atomic bomb on Hiroshima; Little Boy?

Little Boy, the name of the bomb on Hiroshima, sounds more 'innocent' compared to a nuclear test called Alcyon, if you're into connecting the dots that is. And that's what we're trying to do here at the time transportal.

One of the French nuclear test names is interesting: Aldebaran.  This is the name of A binary star in the constellation Taurus, 68 light years from Earth, and one of the brightest stars in the sky. It is also the same star connected to Maria Orsic.

With the Aldebaran, Maria Orsic VRIL connection this subject of nuclear detonations will go a little deeper into the rabbit hole. Especially with the exotic subject of flying saucers that seem to connect to all of this.

Readers who know about the subject of the Manhattan projec, may also know that many Nazi scientists joined the ranks of U.S. scientists during project Paperclip.

Flying saucers or U.F.O.'s have been attributed by many to alien life forms visiting earth. But more direct and closer to home are the man made flying discs  that are seen all over the world. Perhaps some of these flying objects are from a future timeline. Some say this was the case with the U.F.O. crash in Rosswell, New Mexico.

Another connection with nuclear energy and U.F.O.'s are the stories (by military personel) of flying saucers shutting down nuclear facilities.

However it all began for him, or maybe it was his destiny, Adolph Hitler was guided by his fascination with the occult, forever in search of its mysteries, wanting to creating the perfect Ayran race based on mythic Atlanteans, seeking the Spear of Destiny among other artifacts, and as some believe discovering a crashed UFO in 1936 in the Black Forest - Project Haunebu. Some researchers connect Hitler with Argentina, Antarctica, and aliens from Aldebaran who allegedly helped him build UFOs and escape through a portal in Antarctica after he lost the war in 1945.

By: Lionsground | Stillness in the Storm

Mary Orschitsch was a well-known medium and would have been the head of the Vril-Gesellschaft. They gathered a large number of young women around them.
They had long ponytails, something that was very unusual at that time. They believed that their long hair acted as a cosmic antenna to communicate with extraterrestrials. Vril members, also known as “Vril”.

According to the Vril documents these messages, would be obtained telepathically, from Aldebaran, 68 light years away in the constellation Taurus.

Maria had two stacks of papers, one written in code language of the Templars, the other in an ancient oriental language.

This group developed by 1939 a revolutionary electro-magnetic-gravitic engine which improved Hans Coler’s free energy machine into an energy Konverter coupled to a Van De Graaf band generator and Marconi vortex dynamo [a spherical tank of mercury] to create powerful rotating electromagnetic fields that affected gravity and reduced mass. It was designated the Thule Triebwerk [Thrustwork, a.ka. Tachyonator-7 drive] and was to be installed into a Thule designed disc.

Since 1935 Thule had been scouting for a remote, inconspicuous, underdeveloped testing ground for such a craft. Thule found a location in Northwest Germany that was known as [or possibly designated as] Hauneburg. At the establishment of this testing ground and facilities the SS E-IV unit simply referred to the new Thule disc as a product - the "H-Gerät" [Hauneburg Device].

Now we have a few interesting things regarding nuclear detonations:

There's more to nuclear detonations. And one thing for sure is that it can't be detonated just like that.

These things become more important questions in the light of current geopolitical situations and a possible world war 3.

Bytheway: the first atomic test was conducted on July 16, 1945.  July 16 is about 3 months from the date of this article.

Trinity was the code name of the first detonation of a nuclear weapon. It was conducted by the United States Army at 5:29 am on July 16, 1945, as part of the Manhattan Project. The test was conducted in the Jornada del Muerto desert about 35 miles (56 km) southeast of Socorro, New Mexico, on what was then the USAAF Alamogordo Bombing and Gunnery Range (now part of White Sands Missile Range). The only structures originally in the vicinity were the McDonald Ranch House and its ancillary buildings, which scientists used as a laboratory for testing bomb components. A base camp was constructed, and there were 425 people present on the weekend of the test.

The code name "Trinity" was assigned by J. Robert Oppenheimer, the director of the Los Alamos Laboratory, inspired by the poetry of John Donne.

We think that nuclear detonations can cause ripples or disturbance in the fabric of time and space. Maybe this can affect the timelines and our current timeline. Some say that these ripples or disturbances can keep this current timeline in a time loop and is causing mankind not to be able to evolve further. And some say that certain space enteties or energies are helping us to get out of this loop and go further in development of the human species. Perhaps a nuclear detonation is (also) a type of portal to other dimensions or other planets.

If it's real that atomic explosions can cause ripples is time and space and perhaps even trigger or maintain the time loop, then there my be many more reasons for detonating nuclear devices. Not only for war and destruction.